﻿The Deception Detection Model and the Polygraph﻿ 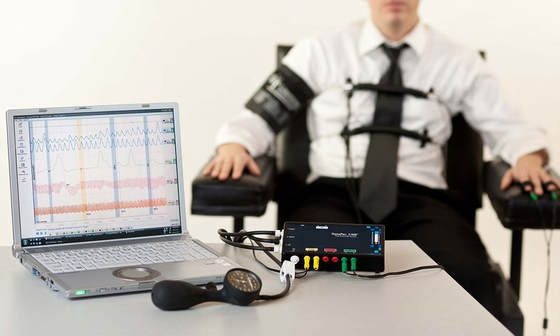 Enforcement Agency Integrity Commission (EAIC) chairperson Yaacob Md Sam’s proposal (NST, Jan 17, 2017) to measure the integrity of government civil servants through polygraph tests, particularly the enforcement agencies, should seriously take into account emerging new issues and the deception detection model or the prototype of the polygraph prior to making policy decisions about the use of this unsettled machine.

His decision should consider the net benefits and other ethical costs for achieving his objectives. In the US market now, there is a deception detection model or the prototype of the polygraph that supplements and substitutes for the polygraph machine without compromising on issues that are sensitive to government servants.

Issues that put the trustworthiness of our government employees based on a pseudo-scientific procedure that fundamentally depends on trickery and deceit and that is biased against the truthful. Yet, the polygraph can be easily defeated by deceptive persons who employ countermeasures learnt within a few minutes. The polygraph was only made popular by movies that had countless dramatic moments showing the guilty sweating profusely as they are hooked up. While cinema depictions may suggest the device is near-infallible, the US Supreme Court ruled in 1998 that there was no consensus that the polygraph was reliable, a finding supported by the US National Academy of Scientists in 2003. With no consensus on the reliability, why then does the Malaysian government want to reinvent the wheel?

The Polygraph’s New Competitor
But the almost one-century-old polygraph invention is now not without a competitor in one of the academics, Cambridge University professor of security engineering, Ross Anderson, says that, “Decades of deception research show that we the interviewer will tell truth from lies only slightly better than random, about 55 out of 100. The polygraph on the other hand has been around since the 1920s and by measuring physiological stress induced by anxiety you can get to only 60.”
However, he says that, “His new method, by contrast, achieved a reliability rating of over 70 percent and I am confident they would be able to do better and in some tests as they have already achieved more than 80 percent.” The research paper was written by Cambridge University’s Sophie Van Der Zee, Utrecht University’s Ronald Poppe, Lancaster University’s Paul Taylor and Anderson who also claims the polygraph could soon be outdated. “The takeaway message in this method is that guilty people fidget more and we can measure this robustly,” he said. As the new method offers an alternative pragmatic method of conducting interviews than the polygraph, our government should also look into this emerging new method to replace the outdated polygraph before they plan to implement the polygraph tests.

Instead the government should be funding our bright university medical students to come up with a better alternative to the polygraph than to this unreliable one. Furthermore the polygraph can easily be abused as an interrogation prop and many people are anxious anyway facing a polygraph on which their job or rights depends. Therefore our government should consider the feelings of these innocent government civil servants who can be victims of polygraph abuse before they implement polygraph tests to check abuse and measure their integrity.

The Deception Detection Model
In my observation the best alternative is awareness training that opens the mind to the vulnerabilities of being deceptive and the goodness of being trustworthy. In the deception detection model, it informs others of the weaknesses of deception and the strengths of trustworthiness. This model trains or informs you to ask the right questions to discover truths.

As Galileo once said, “All truths are easy to understand once they are discovered; the point is to discover them.”

This deception detection model teaches you to ask the right questions. By asking the right questions you can beat the polygraph through your trained human sense by observation and listening simultaneously to two or more deceptive indicative answers.
This deception detection model or the prototype of the polygraph is now available to all with great benefits and with least moral and financial costs together with knowledge and techniques that involves careful observation of specific behaviors of examinees (eg, voice, facial expression, body movements, choice of words, etc) that can be observed with the human sense organs but may also be measured with scientific measurements.

This model teaches you to obtain truthful information in an effective way that is totally non-confrontational, with no one feeling belittled and without putting the interviewer in harm’s way but helping the interviewee do the right thing with dignity. In this model you don’t get false positives that might result if an examinee is aroused by something other than deception (e.g. a concern about false accusations as in the polygraph examination) or anything that provides a basis for countermeasures, such possibilities that are ever present in the polygraph examination are absent here.

The common denominator for all of us here is the understanding of human nature that gives us a conviction that untruthfulness lies at the heart of all too many of the problems we face as individuals, as a nation, Malaysia, and as a global community.

The Model’s Creators
This deception detection model or prototype of the polygraph that is shared here began with Phil Houston a career CIA officer, whose years of experience as an agency polygraph examiner positioned him not only for senior-level assignments overseeing internal investigations and the security of CIA personnel and facilities, but for the creation of that unique skill-set, borne of hundreds of interviews and non-coercive interrogations, that became a sensational deception detection model of the century.

Michael Floyd, another ex-CIA service expert, was the other who paved the way by a distinct career as a private-sector polygraph expert and a provider of training for polygraph examiners in the CIA and throughout the public and private sectors, both of them had conducted polygraph examinations in hundreds of criminal investigations, many of them high-profile cases.

The third creator of this deception detection model was Susan Carnicero, an expert in criminal psychology, who was a CIA operative under deep cover before coming in from the cold and serving as a polygraph examiner and personnel screening specialist. Eventually, all three shared an overarching, driving passion -the ability to be able to tell whether or not a person is telling the truth without the use of the polygraph. It is these three CIA ex-polygraph examiners’ deception-detection model that is shared here so as to bring to the attention of all Malaysians in all government service both civil and in the armed forces that there is a model that can be employed with a degree of effectiveness that compares to or even beats what is achieved by means of a polygraph.

The Effectiveness Of The Model
It’s the effectiveness of their model that the broader intelligence community and federal law enforcement agencies in the United States began to receive training that compelled many to spend their resources to learn and teach this subject. While much of its application within the intelligence community in the CIA was clearly classified, the model itself was determined to be unclassified, so they made it available to outside interests as well.

Over the years they have developed rapidly and have fine-tuned it for a wider range of applications. When it was found that the applicability of this model was so universal that it began to be introduced to people everywhere who could use it in everyday life, at work, at home, and at school. Like everyone else, we routinely have questions, the answers to which have a meaningful impact on our life. Is your boss being completely honest about those projections and why you should stick around rather than leave for a competitor? Is your spouse truthful with you about having done nothing more last night than spending time with a pair of friends for dinner? Is your child being honest when he or she swears to you that he or she has never tested drugs?

Other questions may be less personally important, but you still want the answers: Is that politician being truthful when he says he’s not lying? Visualize that if we are able to identify deception in response to these and the innumerable other questions like them that arise all around us every day and that you were successful in developing skills that make you realize the folly of been deceptive to others. Won’t we then want our civil servants too to develop these skills and be exposed to this model which is effectively cost effective?

Reminder For Caution
To sum up, the potential for polygraph abuse reminds us of caution because people’s lives can be changed in bad ways due to the potential mistakes in this technology. Together with the controversial history of the polygraph this very-high-profile use of the machine by our government agencies may and will go wrong.

Thus the wisest course to follow for curtailing abuses in the civil service, enforcement agencies or enhancing the armed forces is not to reinvent the wheel but to look at our inner selves and ask what has gone wrong and certainly it is not that we don’t have polygraph machines to test our integrity but our failure to control our desirous cravings to have more than contentment.